Visiting Munich: A most convenient city

One of the best things about Munich was being able to use the underground stations to cross the road which was super handy. Germans, after all, don’t tolerate jaywalkers!

And the stations had one escalator which ran both ways – how efficient!

I shouldn’t have expected any less but this was my first time in Germany.

I hadn’t much interest in travelling to Germany previously because I always thought it seemed dull and unromantic compared to France, Spain and Italy.

I also had the displeasure of living with a German housemate in the past who ran the gaff like Mountjoy!

However, I put my misgivings and grudges aside – and had a wonderful time in Munich.

Before Christmas, I spontaneously booked a trip to Munich in Ryanair’s Black Friday sale, €16.99 each way.

Flying mid-week was great as the flight wasn’t full and we even got emergency exit seats – all the leg room!

Tip: If you’re flying Ryanair, wait as long as possible to select a seat, this is one way to get an emergency exit seat as they have to put people sitting there.

We landed in Munich eager to sample some Bavarian delicacies and drench our thirst with a beer.

We took a train into the city centre from the airport which took approximately 30 minutes.

On disembarking, we wandered down the magnificent archway to Kaufingerstrasse. (Pronounced “Cow-finngir-strassa”, rather than “Cow-Finger-Strassa”!

We found a little restaurant called Augustiner Klosterwirt down a side street where we ordered beers and food.

The weather was quite mild and we could even sit outside. Most of the restaurants leave blankets out for patrons on cold days.

The beer was called Edelstoff so it got my approval right away. It was delicious and light and the perfect accompaniment to our meal.

I had two sausages with a pretzel, black bread and a delicious cheese and butter dip called obatzda.

After our meal, we checked into our hotel, Le Meridien Munich. The hotel was centrally situated, right across from the train station on Bayerstrasse and was gorgeous.

After a brief rest, we headed out to the famous Hoffbrauhaus to grab our second beer of the day.

Although the Hoffbrauhaus was busy, we found a quiet corner, where we ordered two steins and a giant pretzel.

It was a lively place, thronged with tourists and had a live band in traditional dress playing in the background.

After drinking a stein, I didn’t think I’d be able for food anytime soon, so we wandered around the streets.

My appetite soon returned and we nipped into a movie-themed restaurant called 35 milimeter. Here we enjoyed a dinner of burgers and chips, however, I failed to finish a pint.

The next morning I saw the nasty effects of dehydration from flying and drinking. My face was incredibly puffy and it remained like that all day!

Breakfast consisted of a coffee and a schmalznudel, a delicious traditional pastry,  from Cafe Frischhut.

After this, we took a train to go to the Schloss Nymphenburg, or Palace of the Nymph, a beautiful Baroque palace outside Munich. 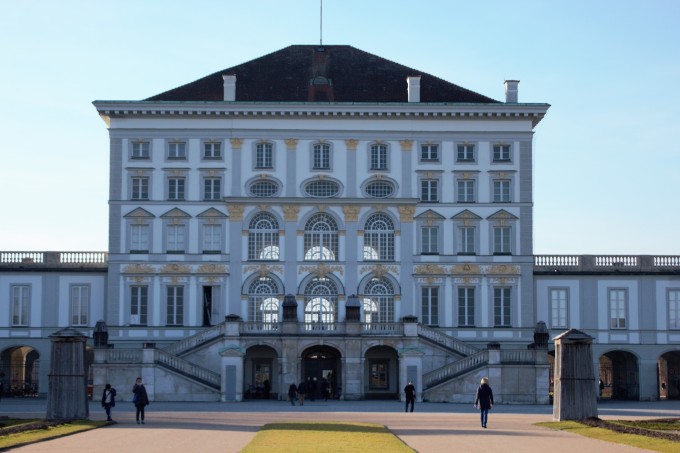 We had to walk for about 15 minutes through an industrial-looking neighbourhood but gradually, our surroundings changed as we got closer.

One thing we immediately noticed was that there weren’t loads of visitors, one huge perk of travelling mid-week.

It was so quiet that some of the museum workers were even painstakingly brushing dust off a chandelier. Rather them than me!

Given that we were only there for two and a half days, we didn’t plan an itinerary but Schloss Nymphenburg was top of our list as we both like history and I love art and architecture.

It was only €6 to visit the Schloss and the adjacent porcelain museum but we decided to give the museum a miss.

I thought this was great value considering many similar places are far more expensive.

The Great Hall is absolutely breathtaking and I could spend hours looking at the stunning rococo design.

King Ludwig’s I Gallery of Beauties was also fascinating, a collection of portraits of women deemed to be the most attractive of their time.

When we came outside, I climbed the steps of the wrap-around balustrade to take in the view from the balcony.

Our beer house tour continued in the evening as we set out for the Augustiner Keller. I opted for a radler, a mix of beer and lemonade – ideal if you don’t feel in the mood for more beer.

We headed to a second beer house Augustiner Braustuben for dinner.

My boyfriend had the wiener schnitzel but I wasn’t crazy about eating veal so I gave it a miss.

Afterwards, we went to the bar of our hotel and enjoyed some expensive but delicious drinks – I swapped the beers for tasty French mojitos!

Initially, we had hoped to visit more attractions including the Alte Pinakothek art museum and the Residenz palace in the city centre.

However, time was limited and my ankle wasn’t up to walking far (although we did do 16,000 steps every day) so we decided to go to the English Gardens instead.

It was a cold day and although we enjoyed our stroll, it probably wasn’t the best time of year to enjoy the gardens.

We stopped off at the Chinesischern Turm or Chinese Tower, a wooden pagoda, five storeys tall.

Here, we finally got to try currywurst with chips at a restaurant and it was absolutely delicious!

The restaurant was almost deserted so we enjoyed a peaceful lunch before getting on a tram back into the city to go shopping.

Munich has all the chain stores, H&M, Zara but although there were still sales on,  I was tired and bloated from all the food and beers and trying on clothes was frustrating.

On a whim, I went to Pimkie where I spotted a gorgeous midnight blue puffer coat. It was marked €30 on sale from €60 but was just €24 when I took it to the till! Result!

Queen of the jungle 🐒

Our final few hours were spent wandering around the Marienplatz, the main square, stopping off for a look into St Peter’s Church and of course, another beer in the Rathaus beer hall before going heading to the airport.

You can climb up the tower of St Peter’s Church and look out over the city but it was dark by then so we decided against it.

We mainly walked and used the underground to get around and we bought multi-trip tickets which were very convenient.

Hope you’ve all enjoyed this post. If you’ve been to Munich and leave a comment and let me know what you thought.