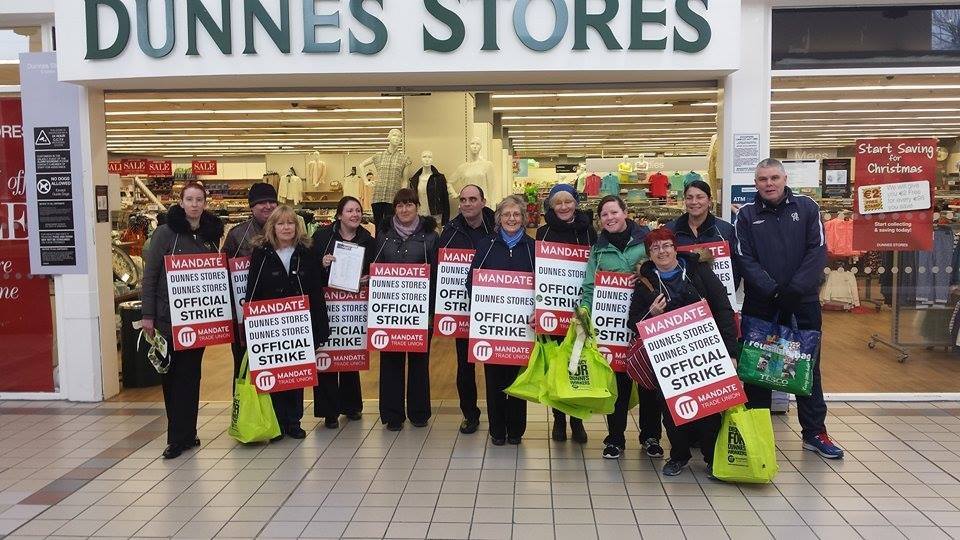 Why we are obliged to support striking retail workers.

This is an opinion piece on the recent strikes by Dunnes workers and the issues currently facing retail employees in many companies nationwide. I tend to keep my blog very light-hearted most of the time but sometimes there are more serious issues on my mind. Particularly as my blog has a focus on fashion and consumerism, I feel it is vital to be aware of the people who work for large retail companies and the struggles they face. This is something I’m really passionate about and I hope it will create understanding why such strike action is necessary.

The recent strikes by Dunnes Stores workers have brought issues facing retail employees, such as low and zero hour contracts and the minimum wage rate, back into focus. Among the problems highlighted by the workers were lack of hours available, hours being spread out in a manner which prevented them claiming social welfare payments, despite meeting the criteria, and bullying and intimidation by management.

As a former retail worker, I sympathise with their struggles. Imagine preparing to work for 7 hours, paying for a bus or petrol, making a lunch and washing and ironing a uniform only to be told after 3 hours “Go home, we don’t need you.” This is the reality those who work in retail fear every single day.  If you are working a three hour shift at €8.65 per hour, you will have made €25.95 for the day. Based on a 15 hour contract with shifts spread over 5 days you will make €129.75 per week and will not be able to claim social welfare for the days worked.  If the 15 hours were spread over less days, employees entitled to part-time social welfare payments could still receive part of their payments. However most companies do not take this into account.

Contrast this wage of €129.75 per week with a 25 year old who can claim €144 per week on social welfare and a person over 26 who can claim €188 per week.  (Welfare.ie.) It’s astounding that someone can make more money on social welfare than from part-time work. Those receiving welfare have absolutely no incentive to take a part-time job as they will make less money and have to pay tax.

Naturally some workers only need a part-time contract due to other obligations. However, zero hour contracts, which have been introduced by several companies such as Xtravision, are beyond unethical. A zero hour contract means the employee is contracted by the employer, and obliged to remain available for work, yet the employer has no responsibility to provide them with a set number of hours per week. The employee is still “working” for the company, albeit sitting by the phone and hoping they will be called into work. Although there are compensation measures in place in Ireland to ensure an employee will receive either 25% of all hours available or 15 hours (depending on which is less) these largely favour the company and not the employee.  (Employment Rights Ireland.)

In 2014, reviews of zero hour contracts were commissioned and the Low Pay Commission was established to examine whether the minimum wage of €8.65 is a “living wage.” Trade Union SIPTU  suggested a minimum living wage of €11.45 per hour earlier this year. (The Journal.) These reviews and investigations are long overdue. However, we require further and more direct action to support those affected.

If we don’t support these workers, it will mean more people dependent on social welfare, more people out of work and  greater social divide. Each one of us is a consumer and use the services of these people every single day.

Companies, such as Dunnes and others, should be boycotted for their treatment of staff. It’s easy for the companies to pit their employees against the customers and make remarks such as “we will lose trade and custom”, blaming the workers when customers are inconvenienced by strike action.  Some Dunnes workers have even lost their jobs since striking and making a stand for their rights. (The Journal.)These reactions are nothing more than bullying and intimidation.

However just as all retail workers have a responsibility towards their customers, customers have a responsibility towards these workers. They have “buying power” and can take their custom elsewhere. This will send a message to corporations that “cost-cutting” and “reductions” that prevent their employees from thriving will eventually also damage the company.

To learn more about this you can visit the “Decency for Dunnes Workers” page and the Mandate trade union site which have more information.