I was really lucky to be given a ticket for Lana Del Rey for my birthday in February. I thought the day would never come but I finally got to see the gorgeous Lana with my friend Janet in Vicar St.

Lana has received criticism for her live performances and harsh comments on her appearance but I was very impressed by her.

I wasn’t sure what to expect as her music can be quite mellow and subdued but she was awesome.

It was her first Irish performance and both of her shows were a sell-out. I’ve always loved her glamorous image and find her music reminiscent and moving. In fact, the first time I heard Video Games it made me cry!

We also got ourselves Lana-esque floral headbands from Penneys.

Palm trees, candelabras with creepy crows perched on them and stone lions set the scene for the gig. It invoked the paradise theme of her album and old-school glamour of her music.

First up were support act Kassidy who are a Scottish folk rock band.

The boys were onstage when we came in at 8pm.

We managed to get close to the stage (about three rows back) after a bit of shuffling around and could enjoy their performance.

Lana and her band came on stage just after 9pm to much screaming and frenzy from the fans. She acknowledged the madness saying “I’m so excited to be here!”

She wore a 60′s style lacy white dress and her huge Jackie O style hair is a masterpiece! She kept touching it all night but it stayed perfect.

In the past, Lana has said she’s not a natural performer in the past and sometimes has to kneel down to stop trembling or reaches out to the fans for reassurance.

She did both several times but seemed confident in her delivery.

Everyone went crazy when she came on and one fan even threw underwear up to the stage which Lana caught and twirled around!
Then she and her band launched into “Cola” which I hadn’t heard before but I loved the song immediately. Even though she’s known for what I call Ameri-melancholia, she was really upbeat and energetic from the start.
Her band and backing singers were fantastic also. It sounds mellow recorded but when sang live the chorus was really powerful with everyone singing along.
However, her voice sounds quite strained at times. Lana came down to the front afterwards and must have been blinded by all the cameras!
After that we were treated to Body Electric, Blue Jeans, Born to Die and Summertime Sadness which sounded amazing live especially the bridge.
Carmen, the narrative of a tragic heroine, “a street-walker by night, a star by day” was also a crowd-pleaser.
I was delighted when she started singing  Knocking on Heaven’s door as it’s one of my favourite songs and I loved hearing her wistful interpretation.
It’s an incredibly sad heartfelt song and although her vocal was slightly weak, this is a subdued song so it didn’t really matter.
It was a perfect conclusion to the equally sad “Without You”.
The chorus sounds so haunting with the crowd singing along. She implores us to “tell me life is beautiful/They all think I have it all/I am nothing without you.”
She introduced “Young and Beautiful” from the Great Gatsby soundtrack saying she hadn’t written many new songs recently apart from this.
As the Great Gatsby was just released a week ago here, it got a great reception from the audience.
“Ride” was introduced with her official video monologue playing in the background.
For someone who’s supposedly living on the road in a motorcycle gang as the official video suggests, she’s still ridiculously glamorous… 😛
Lana then took time to speak to the fans again, saying she really appreciated her friends and fans and received so much applause she started crying!
When you see a famous person close and sense their emotional state it reminds you that they are human and not some untouchable being.
Lana then announced there was time for two more songs. I thought she would finish the show with “Video Games” but she sang it second last and then closed the show with a dramatic version of “National Anthem” which was amazing. She went offstage with a wave when the song finished.
I thoroughly enjoyed seeing her live and thought her interaction with the fans was really sweet.
My favourite performances were “Cola”, “Summertime Sadness” and “National Anthem”. Two of my other favourite songs are “Radio” and “Diet Mountain Dew” which she didn’t sing but you can find them on  Youtube. 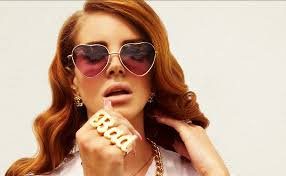 I’d love to hear your opinions on the gig, leave me a comment and let me know what you thought.
Click the grey speech bubble on the right below to leave a comment.
Keep an eye out for my next post– it’s all about jewellery and bling! Thanks for reading as always and don’t forget to check out my Instagram, Twitter and Facebook page.